Our Beliefs, Logo and Name

It is Sealing Time Ministries firm belief that as we near Jesus Christ's second coming, that we should be striving with all the power that God has given us to receive the Seal of the Living God.  Because of this, our title and logo were inspired by God from Revelation 3:12

.  The Bible says "Bind up the testimony, Seal the law among my disciples." (Isaiah 8:16)  Our mission as a ministry then is to lift up the law of God, repair the breach, and prepare a people to receive the Seal of the Living God. (Isaiah 58:12)

In Revelation 7 a group of 144,000 are represented as being sealed.  They are distinctly different from prior generations in that they are sealed while they are yet alive.  This sealing is "a settling into the truth, both intellectually and spiritually, so they cannot be moved." {1MR 249.2}  "The 144,000 were all sealed and perfectly united. On their foreheads was written, God, New Jerusalem, and a glorious star containingJesus' new name." {EW 15.1}  Prior to the time here mentioned, all mankind's decisions for or against Christ, have been sealed by their death.  The Sealing Time spoken of here is still future, however in the light of world events we believe it to be coming very soon.  The Sealing Time has, till now, been delayed (Revelation 7:2, 3), but very soon one of the most serious events (Matthew 24:15) will bring the final test of loyalty to the whole world.  This event will mark the beginning the judgment of the living.  We believe that there are billions of people who are not ready for this momentous event and it is our stated purpose to warn them of the judgment to come.


The Seal of God

We chose the "Seal of God" to be our logo because it is so full of meaning in these last days and we hope that as you read about it's various aspects that you too come to the conclusion that you would like to be sealed for Jesus.
Like any official Seal, the Seal of God contains His name, title, and domain.  We will start at the center of the Sealing Time Ministries logo and work our way out describing the significance and meaning of each element. 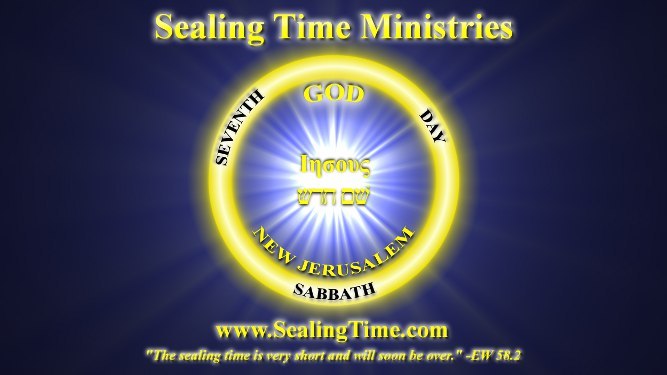 At the very center of our logo is some Greek and Hebrew text.  They simply say "Jesus" (in Greek) and "new name" (in Hebrew).  They are depicted in this way for several reasons.  Because we do not know what Jesus "new name" is currently we chose the Greek and Hebrew for symbolic reasons.  They represent that Jesus is not only the God of the Bible, but that He is the same God of both the Old and New testaments, and as such the Bible is a transcript of the very character of God, and that He is also a God of consistency and does not change. (Malachi 3:6 & Hebrews 13:8)  The Greek and Hebrew here also denote that Jesus Christ loves us so much that He died for all guilty mankind (Romans 3:9) and because of this is entitled to be a Savior for all mankind both "Jew" and "Gentile." (John 3:16)  This further represents the scope of Sealing Time Ministries as that of the whole world, "to every nation, tribe, tongue, and people." (Revelation 14:6) The "new name" portion in Hebrew is also representative that the "Jews" of today are not necessarily of literal Jewish descent, but "he is a Jew who is one inwardly" (Romans 2:28, 29) and as such we can be "grafted in" (Romans 11:21-25) as today's "spiritual" Israel (1 Peter 2:5), and as such are part of God's Last Day Remnant church (Revelation 12:17).  And eventually as such and if faithful to the end (Revelation 17:14), Jesus will not only give each of us a crown (Revelation 2:10), but a "new name" also. (Revelation 2:17, 3:12)

At the center and underneath Jesus' "new name" is a glorious Star.  This represents the fact that Jesus Christ, "the bright and morning star" (Revelation 22:16) is at the very center of all things and is our mediator between God and sinful man (1 Timothy 2:5, Hebrews 8:6, 9:15) in the heavenly sanctuary and that there is salvation in no other. (Acts 4:12)   It also denotes our goal of having Jesus Christ at the center of this ministry.
The light emanating from the glorious Star in the center represents the power of the Holy Spirit to illuminate the whole earth with his glory (Revelation 18:1) and that it is through the work of the Holy Spirit that we are sealed. (Ephesians 1:13)  This light is seen as coming directly from Jesus Christ at the center.  The white-blue tinting of the light represent the work of righteousness by faith blending with a last day people that "keep the commandments of God and the faith of Jesus." (Revelation 14:12) (Numbers 15:38, 39)
The glorious Star also demonstrates that Jesus Christ is our creator as demonstrated by a literal account of His commanding the heavens into existence with words alone (Psalms 33:9) and that as such, He alone is due our worship, praise and allegiance. (Psalm 148:13 & Revelation 15:4)
Just before Jesus Christ's first coming a star appeared (Matthew 2:2).  The wise men came from the east (Babylon) and followed the star until they found Jesus and worshipped Him. (Matthew 2:1,2)  We believe that this symbolizes that just prior to Christ's second coming return that many will come out of Babylon (Revelation 18:2-4) again following the Star and will return to the true worship of our Creator. (Revelation 14:7)
The glorious Star in our logo also represents that we believe in a literal (Revelation 16:18-21), visible (Revelation 1:7), and audible (1 Corinthians 15:52) second coming return of Christ in glory, the beginning of which will be marked by "a star whose brilliancy is increased fourfold in contrast with the darkness." (GC 638.2

Above Jesus "new name" is the title of "God" and while the Bible gives many names to Him our logo uses simply the English word "God."  The word God denotes His authority over everything.  This is His title.

Below Jesus' "new name" are the words "New Jerusalem". (Revelation 3:12

)  These represent the goal that is set before us, the New Jerusalem which is to be our new home after Jesus takes us to heaven.  Jesus told us while He was on this earth that He was going to prepare many mansions for us. (John 14:2, 3)  The New Jerusalem also reminds us that this sinful earth is not our home and that we shouldn't be absorbed with worldliness and materialism.  This also represents our commitment to others.  "Heaven is our goal, to save every soul.  Pray that we all will be there."

The golden band (Revelation 1:13) as presented here represents those who seek purity of character and the righteousness of Jesus Christ.  It also represents that without Jesus Christ at the center, gold and other material things are of no consequence.
Encompassed within the golden band is seen every major aspect of the Sealing Time and the Seal of God.
The round shape of the golden band also represents the worldwide mission of Sealing Time Ministries.  "He who wins souls is wise." (Proverbs 11:30)
The gold also symbolizes that Christ also is aware of all our needs and that He is ultimately the one who provides for these. (1 Kings 20:3, Haggai 2:8)

As the light from the glorious Star reaches the golden band it is seen to illuminate the words "Seventh day Sabbath".  This represents that it is the Holy Spirit sent by Jesus Christ that brings true conviction about the importance of the fourth commandment.
The "Seventh day Sabbath" is located on the golden band because the Sabbath is to be a delight to God's people. And if we observe it "then you shall delight yourself in the LORD; And I will cause you to ride on the high places of the earth." (Isaiah 58:13, 14)
The words "Seventh day Sabbath" are purposely divided into three distinct areas representing the three aspects of the Godhead.  This represents the nature of the trinity consisting of the Father, the Son, and the Holy Spirit, (Matthew 28:19) all three of which are working in union for our salvation.  It shows their working in harmony to restore the Seventh day Sabbath among a last day people who willingly put Jesus in the center of their lives and demonstrate their love through obedience to His commandments (John 14:15) with a special emphasis to the Seventh day Sabbath. (Revelation 14:7)
The observance of the day of the week that God specified, the Seventh day Sabbath, instead of any other day symbolizes the love of Jesus being demonstrated by true worship on the day that God blessed. (Exodus 20:8-11)

The darkness surrounding the Seal of God represents that without Jesus there is no light.  Jesus said, "I am the light of the world. He who follows Me shall not walk in darkness, but have the light of life." (John 8:12)  It is our goal in this ministry to follow Jesus and to walk in His light.  In doing so we seek to follow Jesus' command with a ministry that is a light to the whole world.  "You are the light of the world. A city that is set on a hill cannot be hidden." (Matthew 5:14)
The contrast of the darkness and the light represents the Great Controversy between Christ and Satan with the sacred nature of God's law and the Seventh day Sabbath at the center.  The light and the dark here presented are divided by God's law with the Seventh day Sabbath at the edge of the conflict.  This presents the law of God as a separating wall between those who serve God and serve Him not. (Malachi 3:18)  Ellen White once stated, "I saw that the holy Sabbath is, and will be, the separating wall between the true Israel of God and unbelievers; and that the Sabbath is the great question to unite the hearts of God's dear, waiting saints." {EW 33.1}
The darkness also symbolizes the eventual reward of the wicked.  Jesus said, "And cast the unprofitable servant into the outer darkness. There will be weeping and gnashing of teeth." (Matthew 25:30)  This shows that the eventual results of a life of sin will eternally separate us from God.

Final Thoughts on Our Logo and the Seal of God

We hope that you have found some insight into our choice of our logo and ministry title.  We believe that the judgment will soon pass to the living and that as things become more and more difficult that God will pour out His spirit upon a sealed, willing people that will do what prior generations have not been willing to do.  We want to work with God hand in hand with the Holy Spirit and have asked the Lord if He would give us a place at the very center of the work on the very front lines.  Please join us as we do all in our power to finish taking the gospel to the whole world and help prepare a people to receive the Seal of the Living God.  We firmly believe that it will only take a few dedicated, faithful men and women.  The time is now.  Prepare to be Sealed.  The decisions you make today are eternal.

Tests of a Prophet

The Great Controversy
The Truth about Death

Islam in Prophecy
The Latter Rain
The Truth about Mary